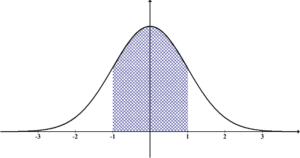 1. The normal curve is “bell-shaped” and symmetrical in nature. The distribution of the frequencies on either side of the maximum ordinate of the curve is similar to each other.

4. The value of the maximum ordinate is

5. The points where the curve change from convex to concave or vice versa is at

6. The first and third quartiles are equidistant from the median.

7. The area under the normal curve distribution is:

The following table gives the area under the normal probability curve for some important value of Z.

9. All odd moments are equal to zero.

What is Ratio scale?

What is Ordinal scale?

What is Nominal scale?

What is Covariance? How to calculate in spreadsheet?

What is Nominal scale?