Here are the teams that will face each other in Round of 16 of UEFA Europa League 2018-19. Matches will be played on March 7 and March 14, with the team listed first playing at home first. 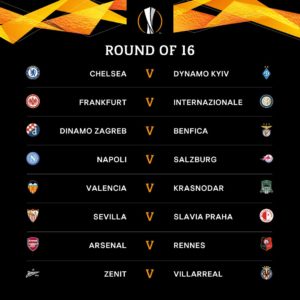 The celebrity former player Andres Palop former Valencia and Sevilla keeper and three-time winner of the tournament helped the draw of fixtures.

Arsenal will be facing Rennes